He is two days short of 16 months and he recognizes the Totoro song played on the speaker, no video. He laughs and says Totoro over and over again.

One simply does not throw out a good piece of pineapple.

To do good you sometimes first need to do bad.

For someone to fully wake up, they have to fall and hit the ground first.

Sometimes the only way to help someone, is to turn your back and walk away.

A teapot can be filled with coke. It is for the closed minded among us to think a label dictates the content.

The boy bit down hard today. First time avocado. Shower on the floor. A stroll in fluffy whiteness and a mask that did not stick.

How the little one didn’t like his nanny to hold another baby.

Two days ago it was the Mid-Autmn Festival also known as the Moon festival. It is celebrated every year on the 15th day of the 8th moon. In the Western Calendar this is always somewhere in September. On this day the moon is full, and therefore round what actually symbolizes reunion of family and friends. Those who cannot make it to be with family and friends on this day look at the moon, knowing that their loved ones are doing the same, seeing the same moon and feel reunited anyway.

Moon cakes play an essential role in this festival. Weeks before you can already buy these little (about 7,5 cm in diameter, and 2 cm in thickness) cakes often made of e.g. lotus seeds, almonds and red bean paste. Sometimes a cooked salted duck egg yolk is placed in the middle of the cake. The crust is decorated with Chinese characters to wish one happiness, a good health and prosperity. People buy these moon cakes in beautifully decorated boxes actually more to give them away to friends and family and anyone else with who you have a good relationship (and want to maintain). Of course what you give, you’ll get back. Well..Maybe not always, but that is the way it should be. 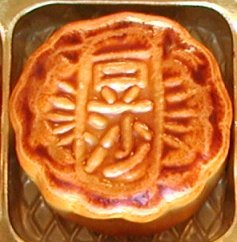 I grew up with eating these moon cakes once a year, as my parents of course bought them and received them as gifts. We always had the ones with the egg yolk in the middle and I could never eat more than a quarter of the cake as the taste is very rich. After eating just a bit, I didn’t like them that much anymore. And as far as I can remember, we always had the same cakes, always the one with the salty yolk. Here in Beijing I discovered that there are many many different kind of mooncakes. I did not eat a lot of them, as I actually am not that fond of them, but when I ate the first one here a couple of weeks ago I was very surprised not to find the yolk in it. The yolk is the thing I like most.

So on this Mid-Autumn Festival, people gather together drink some wine or tea, eat moon cakes and look at the shiny bright moon. It was a bit cloudy in Beijing, but not too bad, I saw the moon, and I ate a cake filled with almond, and red bean paste. No yolk.

There are many legends about the Moon in China and one of the most famous is that of the goddess Chang’e ascending to the moon. I will refer you to wikipedia for the story. Just wanted to tell you that my father named me after Chang’e who lives on the moon. People here in China react positively surprised when I tell them my Chinese name. I think because it is such a typical Chinese name for such a non-typical Chinese girl like me. When I was younger I used to dislike my Chinese name, not knowing at all what it means. Now I think my dad made a good choice when he named his youngest daughter.

It is hot in Beijing! That is, for a Dutch girl like me, it is hot in Beijing. For my Australian friend, Simon, it is nothing as for him these are just normal temperatures. Last Saturday was the hottest day of this year, reaching a temperature of 37 degrees ! And it is not even June! I was walking in ZhongGuanCun, on busy streets surrounded by buses and cars and you can imagine how that even heats up the temperature more. Can you imagine how hot it will be in Summer?!?!

Today is the day that I reach the honourable age of 27. In the morning we visited the minorities park. A park dedicated to all the ethnic minorities in China, where you can have a insight view of the lives of minorities in China. It was too artificial for me. I’d rather travel around in China and visit places where you can find the ethnic minorities just living their daily lives. So no, this kind of parks cannot really impress me or draw my attention. Tonight I will go out for dinner with some nice friends here and hopefully I get used to the idea soon that it is only 3 years until I reach the  honourable age of 30! Pffffff…

Today I have become 26 years old….

"Learning is never cumulative, it is a movement of knowing which has no beginning and no end."
Bruce Lee

On Keeping a Notebook

The impulse to write things down is a peculiarly compulsive one, inexplicable to those who do not share it, useful only accidentally, only secondarily, in the way that any compulsion tries to justify itself. I suppose that it begins or does not begin in the cradle. Although I have felt compelled to write things down since I was five years old, I doubt that my daughter ever will, for she is a singularly blessed and accepting child, delighted with life exactly as life presents itself to her, unafraid to go to sleep and unafraid to wake up. Keepers of private notebooks are a different breed altogether, lonely and resistant re-arrangers of things, anxious malcontents, children afflicted apparently at birth with some presentiment of loss.

Had I the heavens' embroidered cloths,
Enwrought with golden and silver light,
The blue and the dim and the dark cloths
Of night and light and the half-light,
I would spread the cloths under your feet:
But I, being poor, have only my dreams;
I have spread my dreams under your feet;
Tread softly because you treat on my dreams